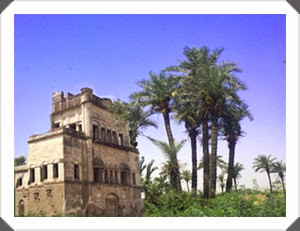 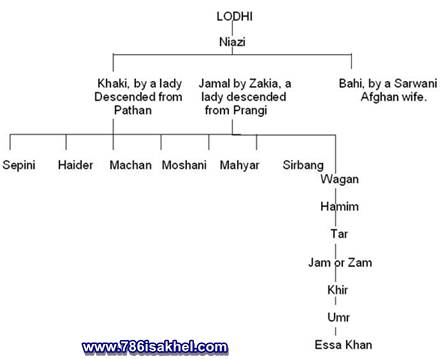 From history ref Essa khan was born in 1453 and his brother would have born be born in b/w 25 years, his last brother was born in 1478. Essa khan died in 1548 at the age of 95 in delhi. The period of 1451 – 1525 was the golden period of khan’s Niazi because in that period Lodhi’s were completely dominated on subcontinent (hindustan). Sikandar lohdhi and ebraheem Lodhi families, sher shah souri and Niazi families are of one unit. The large part of the sir umer khan family was attached with Essa khan Shahi darbar but umer khan permanently settled in Dehli and all of his five brothers lived with him and deputed Delhi dUrbar and current govt. Affairs. In the honor of great war of Haybat khan sher shah suri awarded him a title Azam – e – Hyumayoo and also made him governor of multan and send him to Multan in area Pergani kuchi (present Mianwali) there were great confusion build up between Haybat khan Niazi (father genealogy of habit is given Bhumbra’s genealogy) and sher shah soori and this confusion ended with mutiny 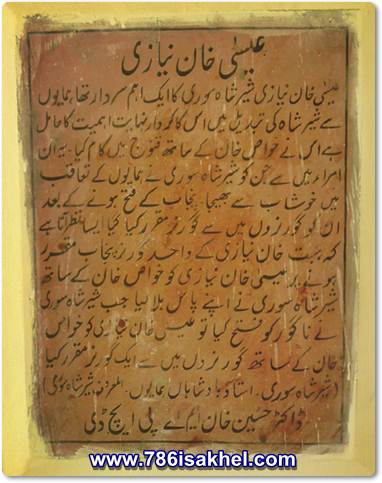 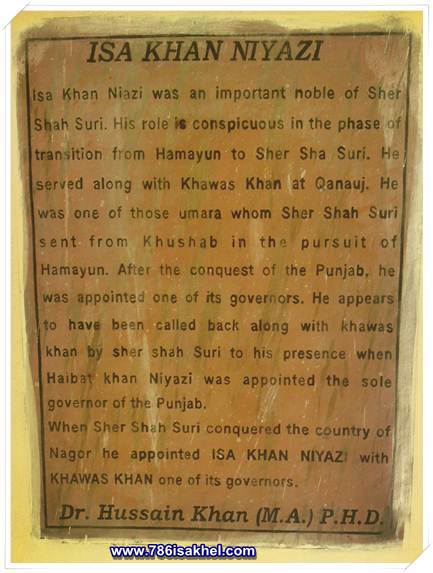 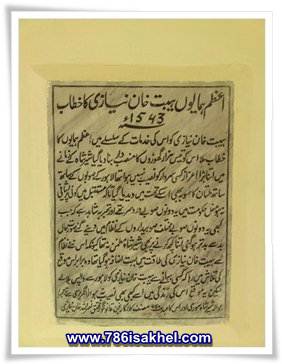 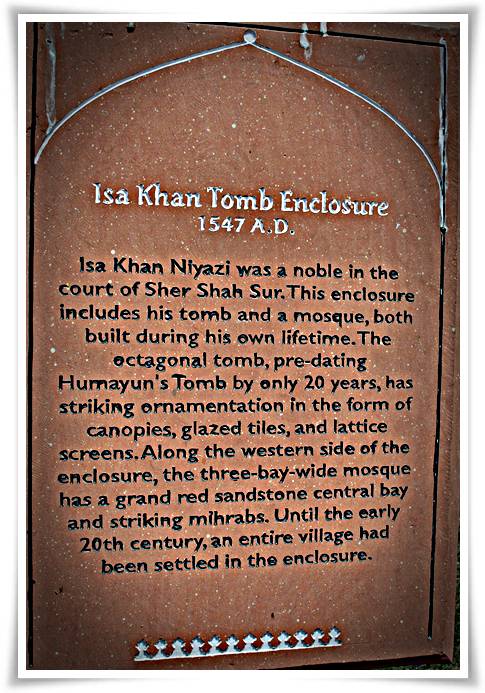 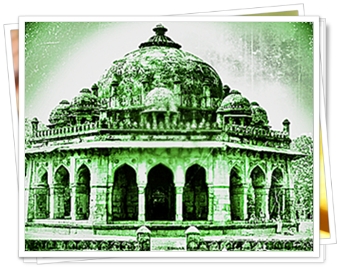 Issa khan’s tomb is situated just outside the Humayun’s tomb precincts in new Delhi. It was built in the honor of Essa khan, a brave and valiant noble under sher shah, the Afghan ruler who had overthrown Humayun it was built in 1547, in an octagonal pattern. It is an architectural gem in the Islamic art in India and remained a model tomb amongst the ruling families in its time. Said to be inspired by the tomb of Siyanda Lodhi 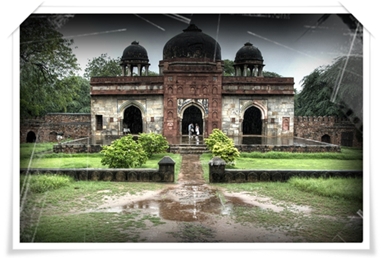 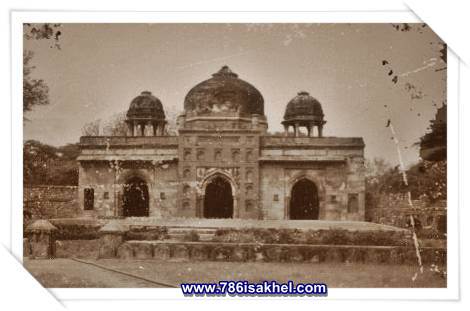 The town was founded about 1830 by Ahmad khan, ancestor of the present khans of Isa khel, who are the acknowledged heads of the trans-Indus Niazi; and it takes its name from shah Isa khel, a religious teacher, whose descendants still live in the town. The Isa khel is also famous for the feudal Niazi chiefs who were designated nawabs during the British colonial era some of them got the title of khan bahader “during that period. 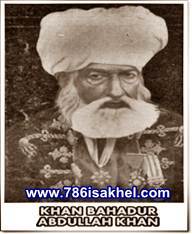 Isa khel remains the first Niazi stronghold in the district after they left the Marat plains.Isa khel, inhabitants were hindus and that before the christian era the town formed an integral portion of the graeco-bactrian empire of Kabul and the Punjab. The Isa khel has been settled of Pathans from the Khyber Pakhtunkhwa . Mahmoud of Ghazni is said to have ravaged the upper half of the district together with bannu, expelling its hindu inhabitants and reducing the country to a desert the series of afghan immigrations into Bannu took place and the bannuchis, the marwat and the Niazis settled in the fertile portion of the country on either bank of the kurram. Towards the close of the fifteenth century they spread north into the plain now known as marwat and squatted there as graziers, and perhaps too as cultivators (on the banks of the kurram and gambila) there they lived in peace for about fifty years, till the time Marwat Lohdis, a younger branch of the lodhi group, swarmed into the country the defeated them in battle, and drove them across the kurram at Darra Tang 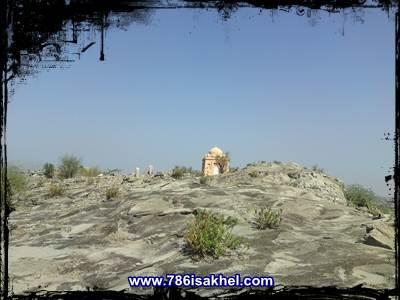 , in the valley beyond which they found a final home the most important sections of the expelled Niazis were the Isa khel. Mushanis and a portion of the sarhangs the first named took root in the south of their new country and shortly developed into agriculturists the emperor akbar presented Isa khel in jagir to two of their chiefs. During the civil commotions of the jahangir’s regime, the Niazis are said to have driven the ghakkars across the salt range, and though in the following reign, the latter recovered their position, still their hold on the country was precarious, and came to an end about the middle of the 18th century as stated above in 1748.

A durrani army under one of ahmad shah’s generals crossed the indus at kalabagh,and drove out the ghakkars, who are still ruling in the cis – indus tracts of the district, owing nominal allegiance to the emperor at delhi. Their stronghold, on muazzam nagar, was raised to the ground and with their expulsion was swept away the last vestige of authority of the mughal emperor in these parts. No sooner had the insatiable ranjit singh gained the indus for a frontier than he determined to advance it to the suleiman range itself in 1823 he crossed the indus at the head of a large force, marched through Isa khel and Marwat without opposition, and pushed on to the outskirts of bannu. But after staying a month or two, he retired without attempting to plant a garrison in the trans-indus country. On 29th march 1849 the punjab was annexed, and the territories, now comprised in the mianwali district, became formally a portion of british india. Isa khel municipality was created in 1875 on the separation the n.w.f.p. from the punjab a further reconstitution took place, and on 9th november 1901 the mianwali district formed out of the four tehsils of Isa khel, mianwali, bhakkar and leiah, the two former being taken from bannu, and the two latter from dera ismail khan district. The Isa khel tehsil was initially part of bannu and Isa khel became tehsil lying on the west bank of the indus, this tehsil is cut off from the rest of the district, and would seem to belong more properly to the n.w.f.p. but is separated even more completely from bannu by the semicircular fringe of the chichali and maidani hills, which leave it open only on the river side. These hills drain into Isa khel and make it fertile . 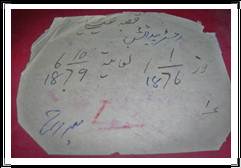 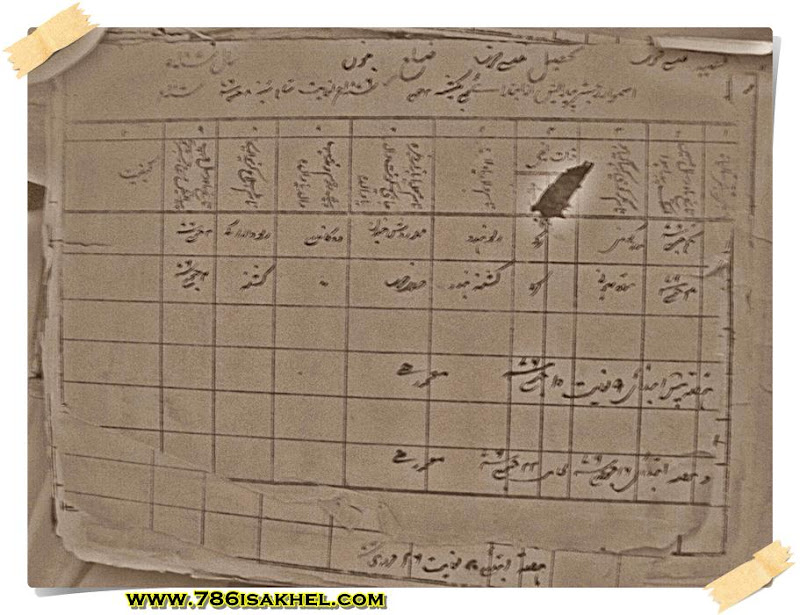 As per birth register record of 1876 Isa khel was known as kasba (tehsil of distict bannu) and hindus were also living there 1st birth entry is a of hindu girl who was born on 1st jan 1876 she was daughter of a shop keeper raloo nehrind her name was mst koomdan they were from rohshan khel mohalla . 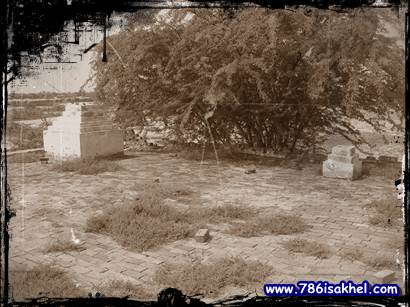 site of sati site exist in Isa khel where the hindus use to perform the tradition of sati.sat? (devanagari: the feminine of sat “true”; also called suttee) was a religious funeral practice among some hindu communities in which a recently widowed hindu woman either voluntarily or by use of force and coercion would have immolated herself on her husband’s funeral pyre. The practice is rare and has been outlawed in india since 1829. 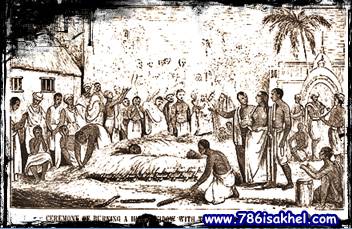 the term is derived from the original name of the goddess sati, also known as dakshayani, who self-immolated because she was unable to bear her father daksha’s humiliation of her (living) husband shiva. The term may also be used to refer to the widow herself. The term sati is now sometimes interpreted as “chaste woman.” 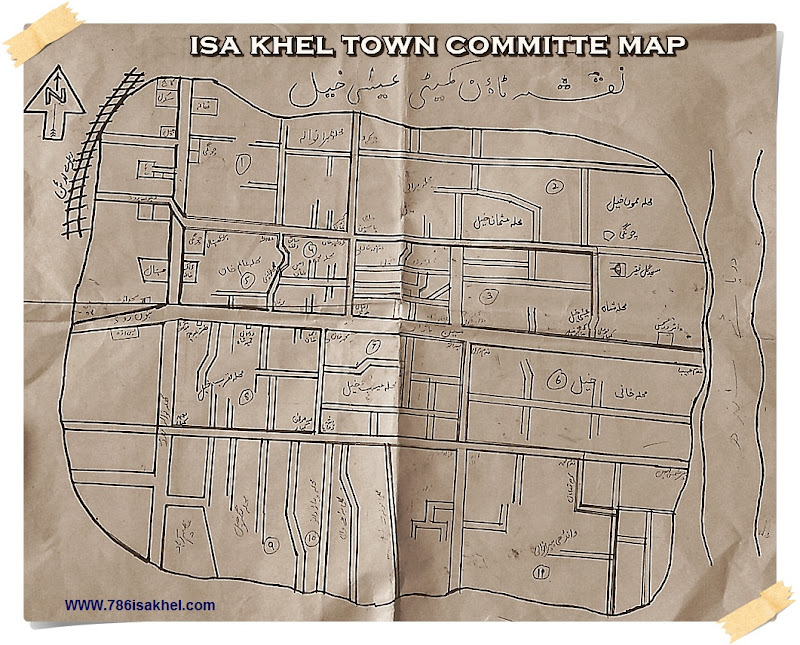 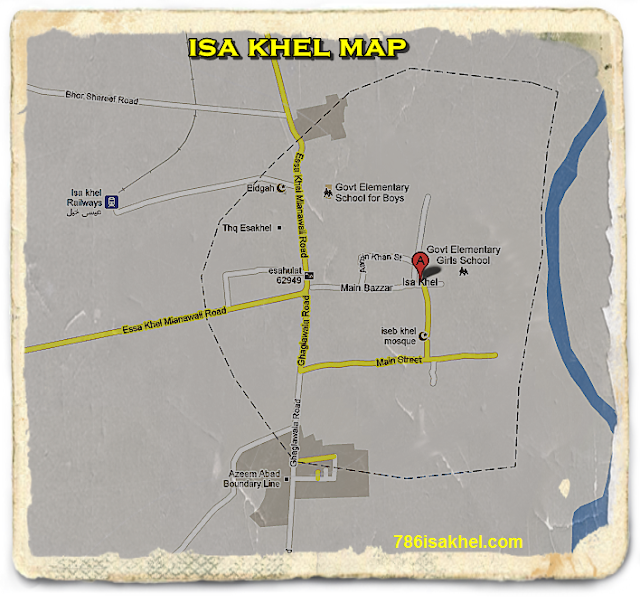 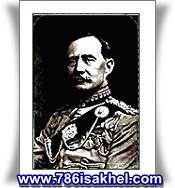 He was a British general and was commissioned into the British army infantry in 1884. Later he transferred to the colonial Indian army and served on the north-west frontier, in Waziristan and in china. In his diaries of General Lionel dunsterville 1911-1922 he writes:

November-20th=    First Day Staff Tour. We are to cross a Division over the Indus in face of an enemy. I along with  General Staff Officer 1st. Grade to General Campbell, commanding the Division, General Younghusband, General O’Donnell and Miles commanding the 3 Brigades. General  Stokes commanding Artillery.

November-21st=    Actual crossing in ferry boats – out all day. Difficult getting horses in and out, reached  ISA KHEL at sunset. Sir James Willcocks approves and all goes well. Gen. Hudson is also with him.

November-23rd=    More attacks and all over. Left ISA KHEL in the small gauge train at 2.30 p.m. arrived river bank Kalabagh 4.30. Crossed by steam ferry. Small gauge train again for 1 miles to Mari, then change again and via Dand Khel to Makhad Road, where arrived 8 p.m. An enormous dinner waiting for me and a Knattak War Dance of 80 men.

November-24th=    Rode at 8 a .m. with Ali Khan and Masim Khan to Makhad, 10 miles. A great reception. I have lost my topee so wore a turban which was much admired. Visited the shrines where prayers were offered up for my speedy promotion to General – a lot of old Native Officers. Rode back in the evening and left by train at 9 p.m. 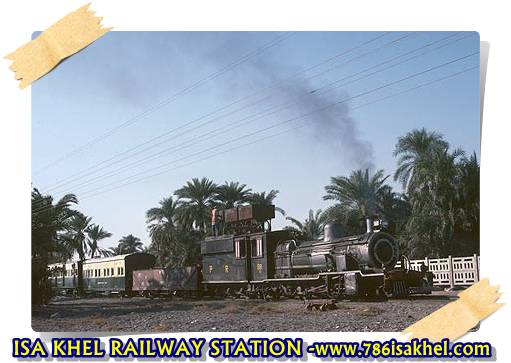 A sikh ruler of the sovereign country of punjab and the sikh empire. He was the eldest legitimate son of ranjit singh and maharani datar kaur. He succeeded his father in june 1839.after succeession he visited BANNU and enroute he stayed night at sikhanwala kot(fort) in ISA KHEL

Isa Khel  Tehsil, head-quartered at  Isa Khel , is one of the three  Tehsils (sub-divisions) of Mianwali  district in the Punjab province of Pakistan. Total area of the Tehsil is 675 square miles. Average area under crops in 1877 to 1 881 was 128 square miles. Total area assessed for government revenue   432,016 acres. Total revenue of the Tehsil was Rs 6361 and   population of Tehsil in 1801 was 59,546 persons  from following cast3,982 ; Number of towns and villages were  47 , of which 18 contained less than five hundred inhabitants. The landholders are mostly of the Niazai tribe but during their long residence in the valley of the indus, they have lost their mother tongue, Pashtu, and now use only the Punjabi dialect of their tenants. Union councils of Isa Khel Tehsil.The Tehsil of  Isa Khel  is administratively subdivided into 14  union councils:  14 unions are Chapri, Isakhel, Kalabagh, Kallur, Kamar Mushani, Kamar Mushani Pakka, Khaglanwala, Kot Chandna, Sultan Khel, Tabisar, Tanikhel, Tola Bhangi Khel, Trag, Vanjari .On this page detail about each has been  given for the information of the visitors please . 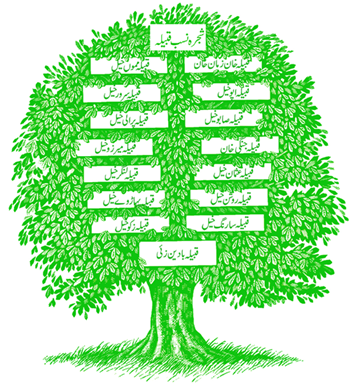 mianwali.org website  is having  largest online library of family trees with pictures about   clans living in Isa Khel and in Isa khel unions and their historical  information . We’re constantly adding more. So, there are always new discoveries waiting for you. 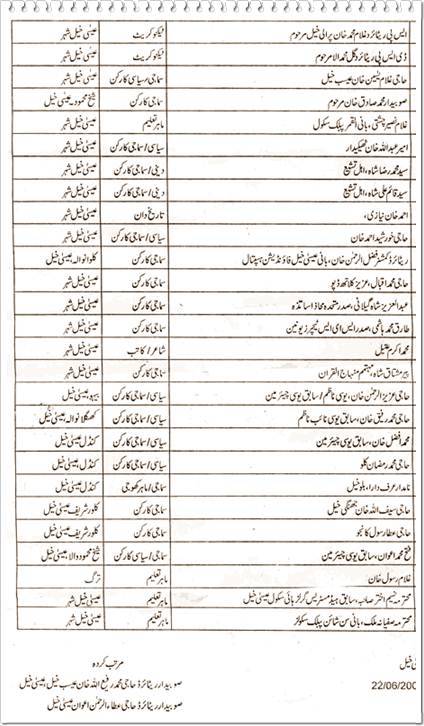 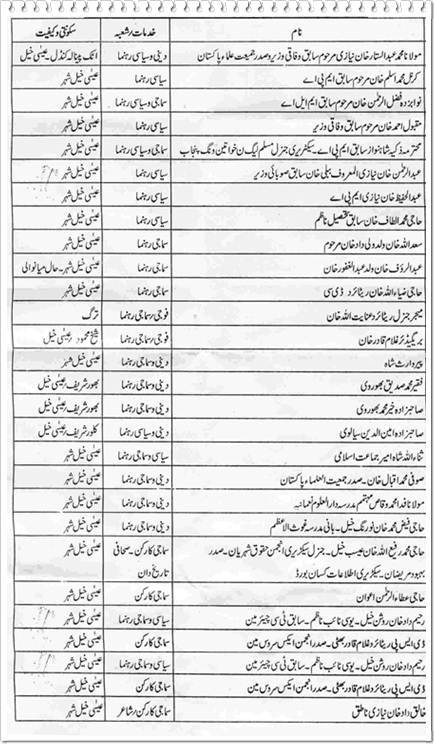 ISA KHEL  base map is the graphic representation at a specified scale of  fundamental information about isa khel.CLICK BELOW ICON TO SEE THE MAP

ISA KHEL Land use capability map created to represent the potential uses of a “unit” of land. Map measured using various indicators, like rock type, soil type, slope, erosion degree and  and vegetation type . In more scientific terms, these can be classed as lithology, edaphology, topography, gradient, and biotic features.

See the map by clicking icon below

Isa Khel road map or route map attached to primarily displays roads and transport links rather than natural geographical information. It is a navigational map that commonly includes political boundaries and labels, making it also a type of political map. In addition to roads and boundaries, road maps include points of interest, such as prominent businesses or buildings, tourism sites, parks and recreational facilities, hotels and restaurants etc