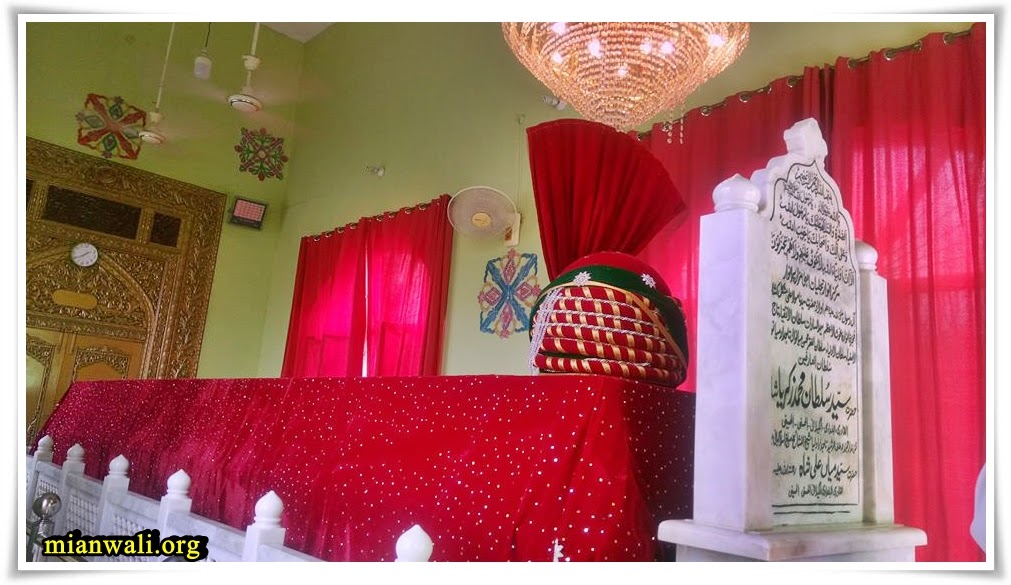 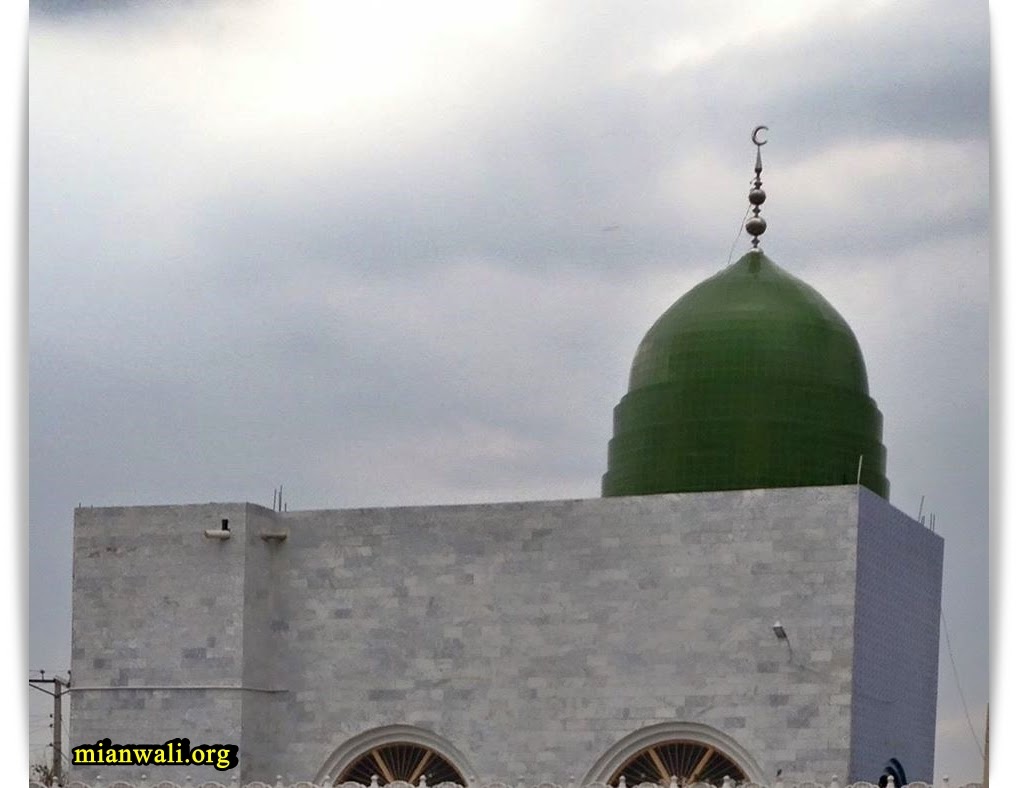 Sheikh Jalaluddin was accompanied by his son Mian Ali, whose name is Mianwali today. Mian Ali had a son, Mian Syed Zakaria Sultan, who made a unique name in Islamic history with his wisdom and religious services.

Sultan Muhammad Zakaria’s father was a member of the Qadriyya dynasty and he was distinguished from all his brothers from his childhood due to his greatness, so the crown of Khilafah was placed on his head. 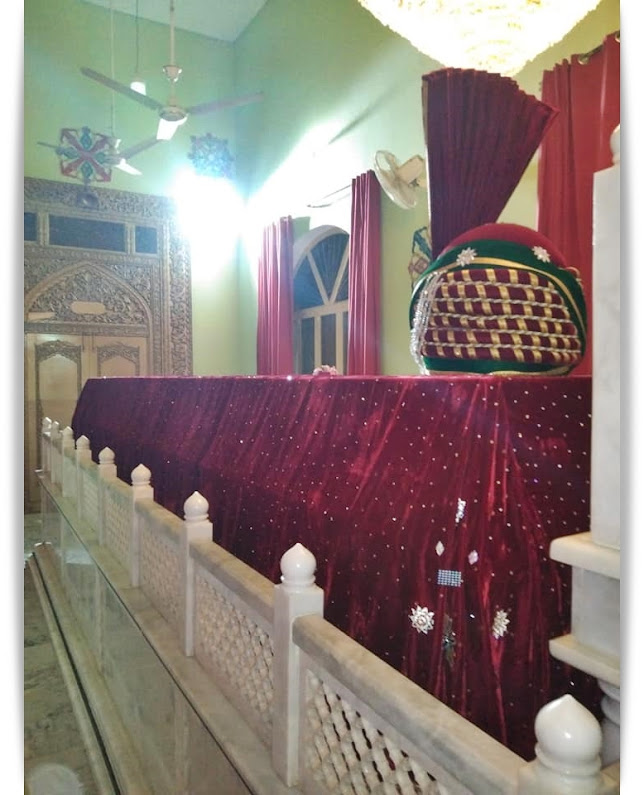 When Hazrat Sultan Muhammad Zakaria settled with his father Mian Ali Ahmed in Kachhi (Mianwali), there was a government of non-Muslims who were very cruel to Muslims. Mian Ali Ahmed united the Muslims and saved them from oppression. When the complaint of atrocities reached Sultan Muhammad Zakaria again, he asked for dried flowers of Aak (Akra) and set them on fire. At the same time, he said that Ghakkar would be annihilated. So the curse of Allah’s guardian fell on them in this way. They fell into each other’s state in a state of intoxication and intoxication. They started killing each other and were destroyed by their own hands. 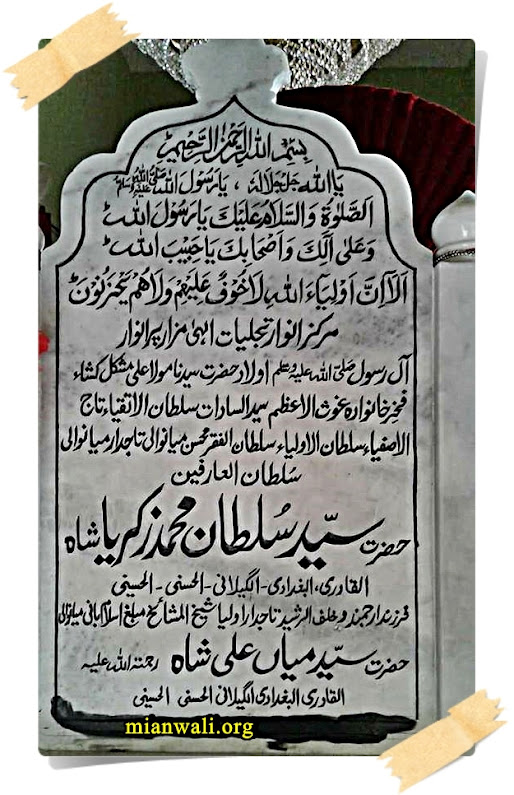 His father founded Mianwali village. The son is said to have exhibited supernatural powers from an early age. When the father first arrived in these parts, he made a temporary stay at a place called Mian di Mel on the bank of the river, about a mile north of the town of Mianwali. There he had a dream that he would find a final resting place by taking a boat with all his baggage and letting it float down the river until it should come to land of its own accord, at which spot he. Would find a permanent  home. When he awoke, it only remained for him to secure the necessary boat, which, however, he found a difficulty in doing. His son Sultan Zakria thereupon turned and faced towards Kalabagh, and shouted at the top of his voice, calling upon one Sultan Mohana, to bring his boat down the river for their use. Sultan, though 25 miles away ·at Kalabagh, heard the call and answered it by star.ting down the river with his boat and arriving-at his destination on the following morning. The father and son with their chattels were then put on board, and, letting the boat float downstream at its will, were landed by it at a graveyard in the village of Watta Khel Here they settled and soon after built the hamlet of Mianwali. The second miracle of Sultan Zakria was that which won him the gaddi in succession to his father. Of three sons, Sultan Zakria was the youngest and the father told them that he would nominate none of them as his successor unless he should have worked a miracle. He accordingly arranged to test their powers and took them to the river bank.

There be promised to nominate whichever of them should walk across the river without sinking. The two elder brothers refused to face the ordeal, but Sultan Zakria walked across the river and back again on the surface of the water. He then propounded to his brothers the suggestion that, if they followed him, and repeated his name Zakria all the time they were walking on the water, they would succeed in doing as he had done. They consented to try and be undertook a second trip, upon which they followed him. Half way .across, while they were articulating, Zakria, Zakria they realized that Sultan Zakria, for his part, was repeating, Allah, Allah. Asking themselves why they likewise should not put their trust in the name of Allah rather than in that of Zakria, their brother, they imitated his example, but no sooner did they utter, Allah, Allah than they began to sink. Their brother then called upon them to repeat his own name, as he had bid them, saying that their spiritual advancement had not reached a stage wherein they might invoke ·the name of God. They then returned safely and Sultan Zakria’s higher claim to the gaddi was thence-forth acknowledged by them.

Many other miraculous deeds are ascribed to Sultan Muhammad Zakaria ,among the best known of which are the following. 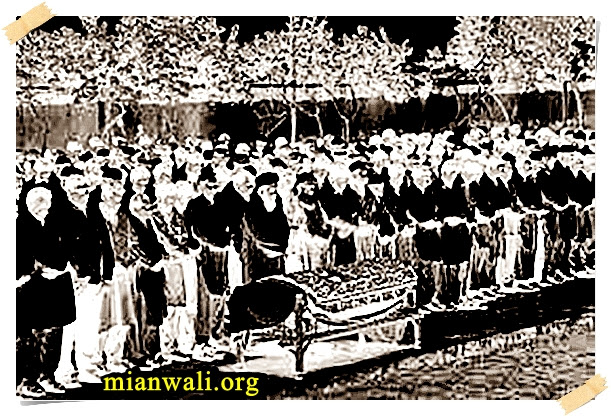 Ongoing once to Rokhri to use his good offices in the settlement of a feud, his interference in the matter displeased the Pathans of Rokhri who planned a practical joke at his expense. One Pathan pretended to be dead. A funeral procession was marshalled and the parents ‘and relatives followed the bier, wailing and weeping. Arriving at the house where the Sheikh was staying, they requested him to read the funeral service, to which the Sheikh assented. The Sheikh accordingly read the janaza and the by-standers watched expectantly for the moment when the holy-man should pronounce: Allah-o-Akbar, when, by ‘previous agreement, it had been decided that the corpse should rise up and confound him. When; however, the service was completed, and the moment for the denouement arrived,’ it was the gazing by-standers who were confounded. Instead of the dead man springing to life, as they expected, he continued to lie without si’gn or motion, and when they approached and uncovered him, it was found that he was m very truth a corpse. 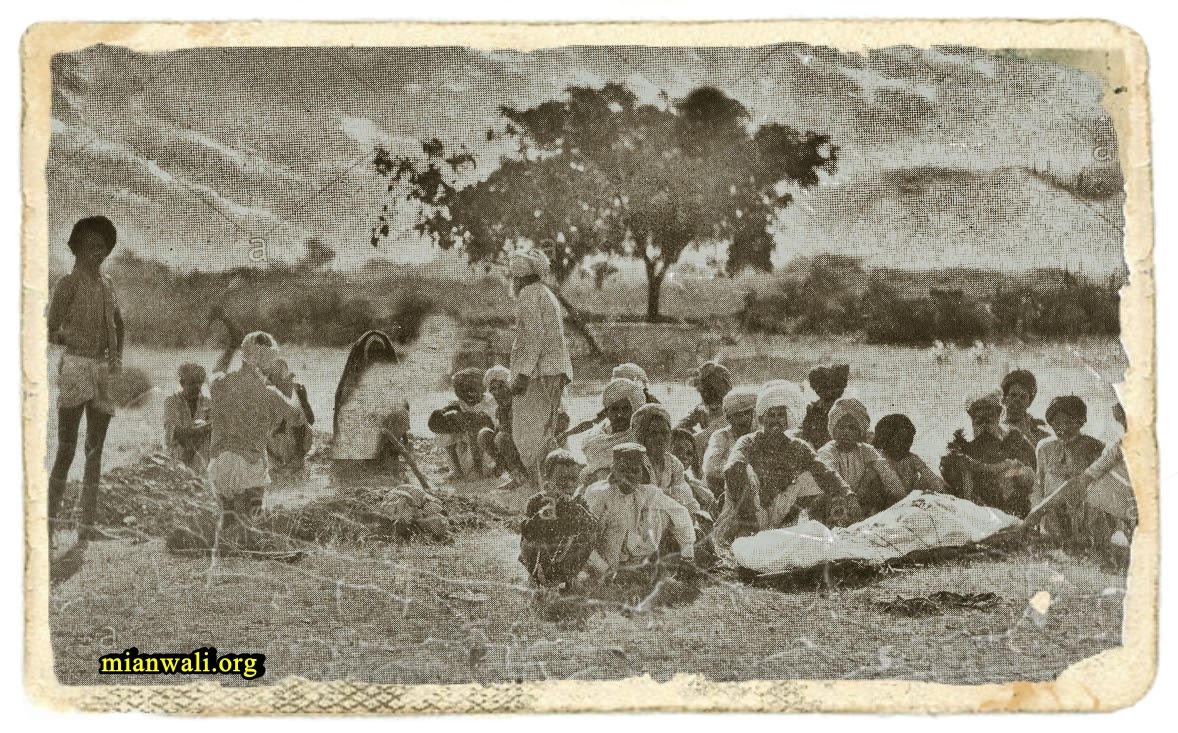 On another occasion Sultan Zakria invited all the zamindars of the villages around Mianwali to aid in constructing a tank which is now known as Sultan Zakria’s tank and lies north-west of Mianwali town. The zamindars agreed, provided that Sultan Zakria would feed them on halwa and mutton. He accepted this condition, and at the end of the day’s work he procured the necessary food, already prepared by the simple process of spreading his sheet over a Kari tree and ordering his servants to take from under the tree whatever they found there. Needless to say, they found sufficient platefuls of sweets and mutton to satisfy the large gathering that was present. Among other miraculous feats, Sultan Zakria is also said to have shifted a wall without the application of material force and to have endowed with life and clothed in flesh the dry bones of a sheep of which the meat had already been cooked and eaten. By miracles such as these he won great influence and respect in the neighborhood, and his tomb is still visited by large numbers. His name is frequently invoked as an oath, and his shrine is not uncommonly the scene of the settlement of civil disputes, in which one party has bound himself to abide by any statement made at the shrine by the other party. The Mianas of Mianwali are the descendants of this holy-man. 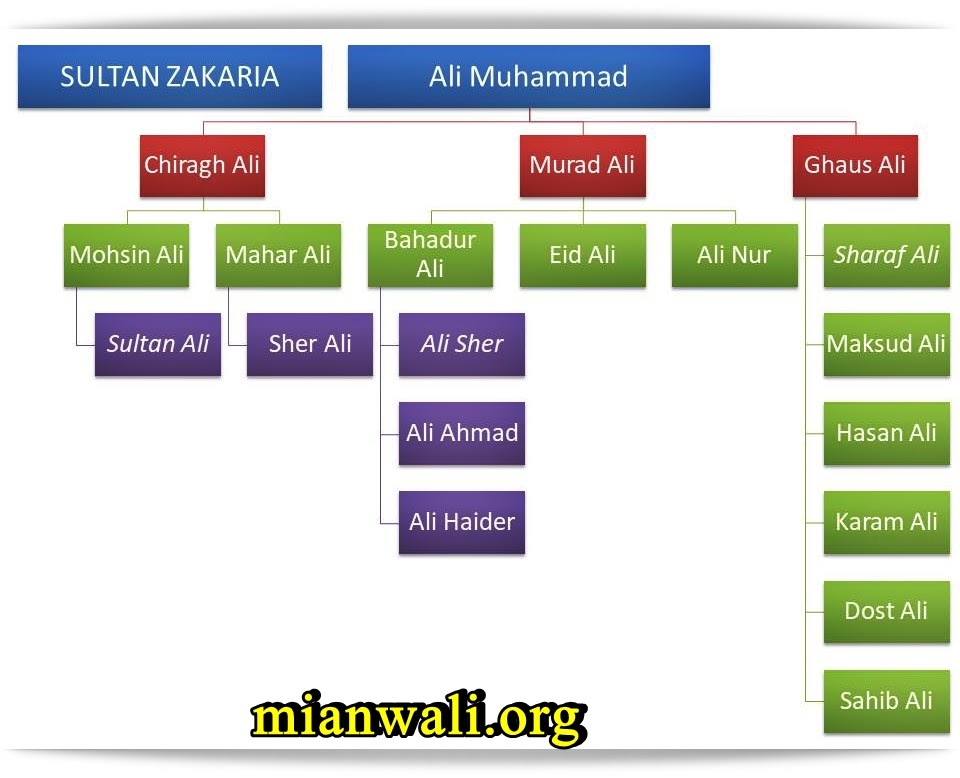 Mian Sultan Muhammad Zakaria was buried on the west side of the city but  later on Shrine was transfer . 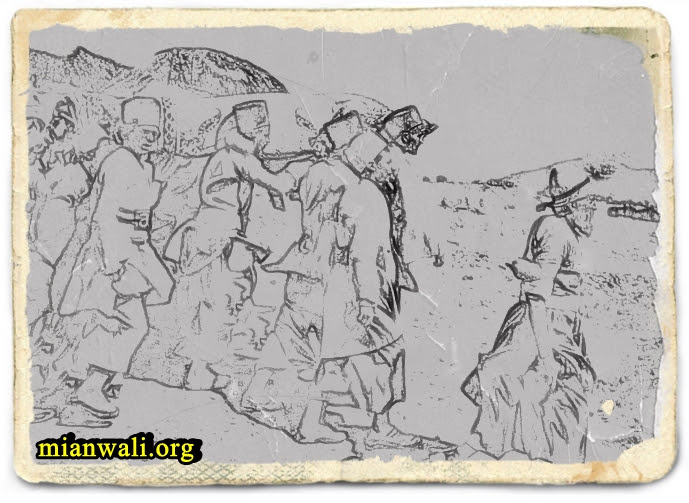 A few years after the burial, Sultan Muhammad Zakaria ordered his grandsons to be taken out of the first shrine in a dream. As a result, his two grandsons, Murad Ali and Ghous Ali, became hesitant. The second time in a dream you ordered to get me out of here and take me to the east and build a shrine where your footsteps stop. So you were taken out of there and put on the bed and then they left carrying these four pies on their heads. They came to a high mound and their footsteps stopped, so you were buried there. This is your current shrine. Your mausoleum is located in the ancient cemetery of Mianwali city which is known by your name. Thanks to the efforts of Mr. Sahibzada Muhammad Alamgir Shah, your new mausoleum was built in 2006 with a very beautiful door on it which is made of prefabricated wood. 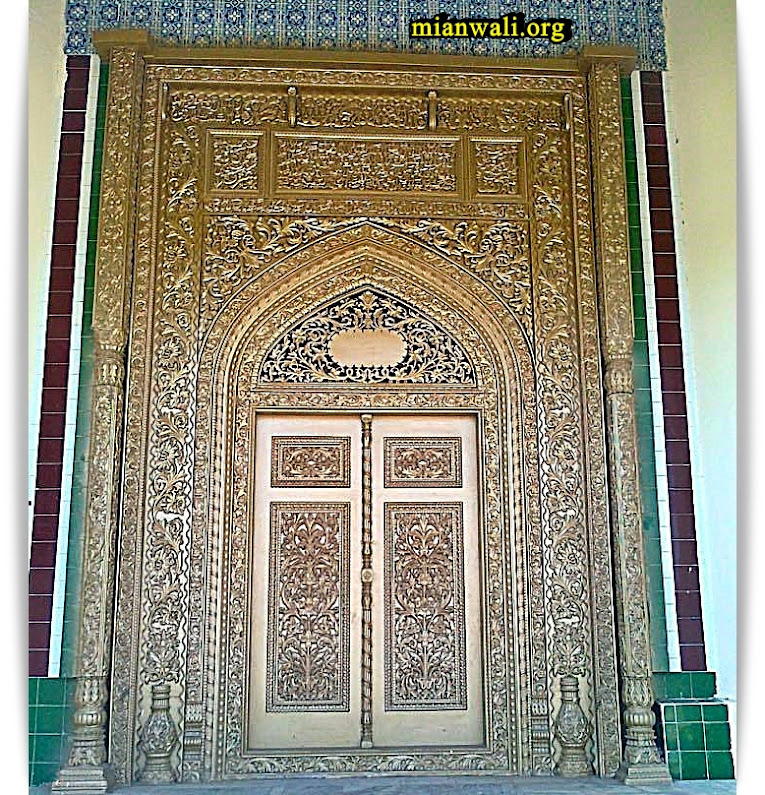 Sultan Muhammad Zakaria Urs is held in the Islamic month of Muharram from 1st Muharamm to 20 th Muharram . 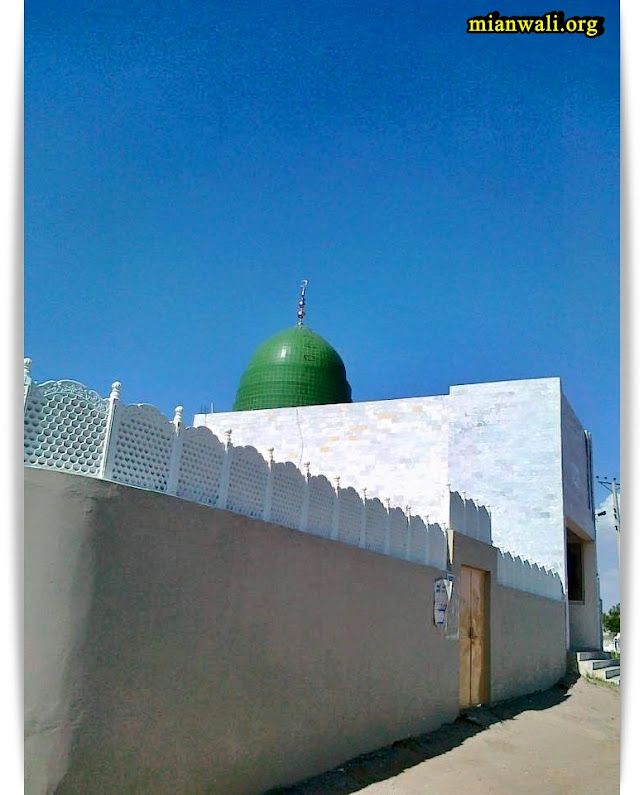 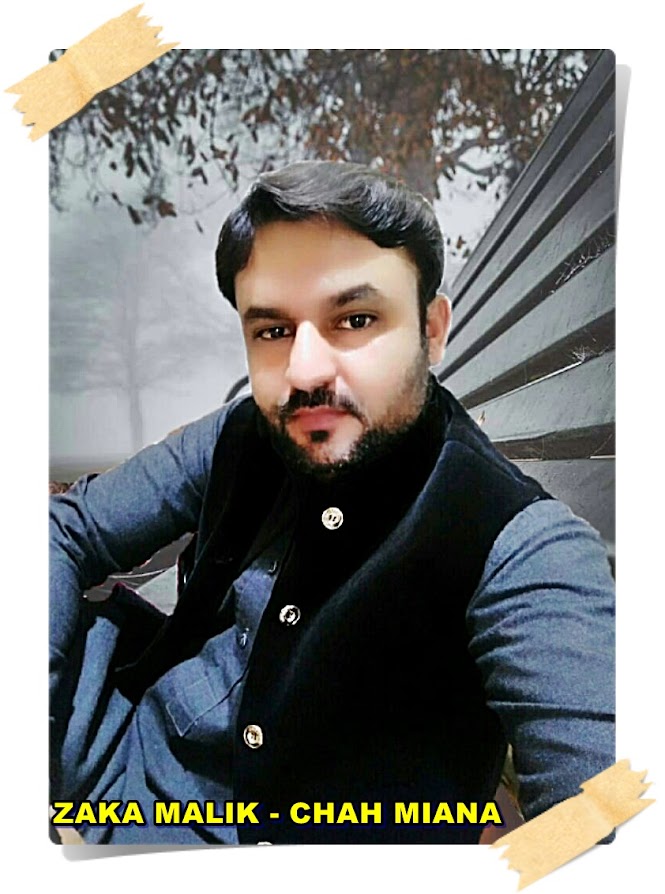