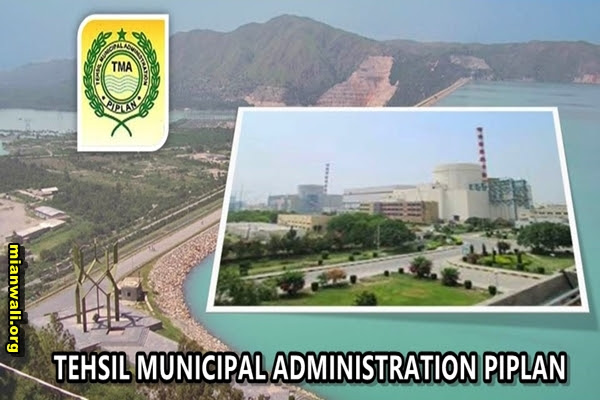 Piplan Tehsil , is an administrative subdivision (tehsil) of Mianwali District in the Punjab province of Pakistan. The tehsil is subdivided into 2 Municipal committees and 12 Union Councils – one of which forms the capital Liaqatabad.  According to 6th Housing and Population Census-2017, total population of Piplan Tehsil is 403,938, out of which 307,729 lives in rural areas while 96,209 lives in urban areas.

TMA Piplan is located at right and left banks of River Indus with a historical background. Unlike hilly Essa Khel, Piplan is plain and fertile land, rich in agriculture and trade.

Piplan City is situated at the bank of River Indus. Chashma Nuclear power Plant is constructed at Chashma, Tehsil Piplan. CJL and CRB canals also starts from Chasma Barrage in Tehsil area of Piplan..Population of TMA mostly comprise of settlers. Principle tribes of Pathans, Balouch., Jaats, Maliks, Rajpoots and Syeds settle in the premises of TMA and its surrounding villages. Major crops of the area are Moong, Cotton, Gram and Wheat.

FUNCTIONS AND POWERS OF THE PIPLAN TEHSIL MUNICIPAL ADMINISTRATION.

The functions and powers of the Tehsil Municipal Administration, according to the PLGO 2001, shall be to:

(a) Prepare spatial plans for the tehsil in collaboration with Union Councils,including plans for land use, zoning and functions for which the Tehsil Municipal Administration is responsible;

(b)   Seek approval of the Tehsil Council for the spatial plans prepared by it          after due process of dissemination and public enquiry, incorporating          modifications on the basis of such inquiry;

(d) Exercise control over land-use, land-subdivision, land development          and zoning by public and private sectors for any purpose, including for          agriculture, industry, commerce markets, shopping and other employment          centers, residential, recreation, parks, entertainment, passenger and          transport freight and transit stations;

(e) Eforce all municipal laws, rules and bye-laws governing its functioning:          Provided that the Tehsil Municipal Administration may, with the approval          of  Tehsil Council, exempt any Union from application of any specific          provision of the bye-laws made by the Tehsil Council under this Ordinance:   Provided further that the Government may, on the recommendations of          Tehsil Municipal Administration through District Government, exempt any          Union or a part thereof from the application of rules relating to land use,           building control, tax on property or in any other matter dealing with          municipal services:

Provided also that such exemption shall not extend to any organised housing schemes, zoning of industrial and commercial areas, and matters concerning environmental protection;

(h)    provide, manage, operate, maintain and improve the municipal infrastructure and services, including­

(i)     water supply and control and development of water sources, other than systems maintained by the Union and Village Councils;

(i) compile information provided by Union and Village Councils of prioritized projects in the tehsils;

(j) prepare budget, long term and annual municipal development programmes in collaboration with the Union Councils, under the directions of Tehsil Administrator;

(k) maintain, with the assistance of the District Government, Union and Village Councils, a comprehensive data base and information system for Tehsil Municipal Administration and provide public access to it on nominal charges;

(1)    propose taxes, cesses, user fees, rates, rents, tolls, charges, surcharges, levies, fines and penalties under Part-III of the Second Schedule for approval of the Tehsil Council and notify the same after such approval; and

(o) co-ordinate and support municipal functions amongst Unions and Villages

(p) regulate markets and services and issue licenses, permits, grant permissions and impose penalties for violation thereof as and where applicable;

(r) develop and manage schemes, including site development in collaboration with District Government and Union Administration;

(r)    authorize an officer or officers to issue notice to a person committing any municipal offence and initiate legal proceedings for continuance of commission of such offence or for failure to comply with the directions contained in such notice;

(s)    prosecute, sue and follow up criminal, civil and recovery proceedings against violators of municipal laws in the courts of competent jurisdiction;

(u)   prepare financial statements and present them for internal and        external audit in the manner as may be prescribed.

(2)   The Tehsil Municipal Administration may,­

(a)   assign or contract out, on such terms and conditions as are approved by the Tehsil Council and after inviting public objections, any of its functions to any public-private,  public or private organization: Provided that responsibility for discharge of such functions shall continue to vest          with  the Tehsil Municipal Administration.

(b)   on such terms and conditions as are mutually agreed, transfer its functions or  responsibilities with regard to providing municipal services to the Union  Administration or Village Council: Provided that no function or responsibility shall be transferred without allocation of corresponding resources and funds:Provided further that the responsibility to regulate and monitor such functions and services shall remain with the Tehsil Municipal Administration.

(c)   by an agreement and on such terms and conditions as may be mutually agreed, perform any function of the District Government;

(d)   with funds raised through voluntary contributions or external grant, but without  recourse to additional enhanced taxation, user charges or fees or recourse to any other sources of public funds and without incurring debt of any nature, undertake any development project;

(e)   with the approval of the Government and concerned regulatory authorities of the Federal Government and Provincial Government, set-up, acquire, manage and operate  any commercial activity on a self-financing basis with no liability to the public exchequer; and

(f)   set-up a corporate body to perform any of its functions, singly or jointly with other public or private bodies:Provided that responsibility for discharge of such functions shall continue to vest with the Tehsil Municipal Administration.

PIPLAN  base map is the graphic representation at a specified scale of  fundamental information about PIPlan.CLICK BELOW ICON TO SEE THE MAP

Isa Khel road map or route map attached to primarily displays roads and transport links rather than natural geographical information. It is a navigational map that commonly includes political boundaries and labels, making it also a type of political map. In addition to roads and boundaries, road maps include points of interest, such as prominent businesses or buildings, tourism sites, parks and recreational facilities, hotels and restaurants etc