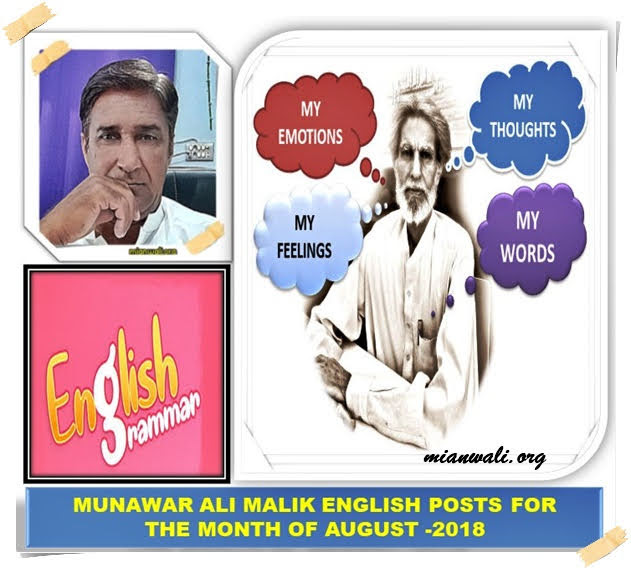 UN is a very commonly used Prefix. Like IN , it usually means ‘not’. For instance :

3. The heat these days is unbearable.
unbearable ( un+bearable ) = not bearable / intolerable

4. He left the city for some unknown reason.
unknown ( un+known) = not known

5 . His success in examination is unlikely .
unlikely ( un+likely ) = not likely / hardly possible 1 Aug 18

PRE is a Prefix that means ‘before’ or ‘already’. For instance :

2. Preschool is the stage at which kids are prepared to join regular school.
preschool ( pre+school ) = before school / prep

4. There were some complaints of pre-poll rigging.
pre-poll ( pre+poll ) = before election

NOTE : pm used with time like 4 pm, 7 pm is the short form of ‘post-meridiem’ which means the time after noon to midnight. 3 Aug 18

Salaam, Everybody,
When two words are combined to give a special meaning, the first word is a Prefix. For instance :
1. Schoolboy ( school+boy ) = student of a school
2. Headmaster ( head+master ) = head of a school
3. masterpiece ( master+piece ) = extremely good work of art
4. tailpiece ( tail+piece ) = additional paragraph at the end of an article or letter etc to say something important
5. bookworm ( book+worm ) = a person who has the habit of reading too much / a person excessively fond of reading,

Our sweetie, Zafar Niazi, is again off the radar. Might be sitting somewhere cursing one or all political leaders.  4 Aug 18

IL- is a Prefix used with some words beginning with L . It gives those words opposite meaning like the Prefix IN- which we have already studied.

3. illegitimate ( il+legitimate ) = not in accordance with law or morality

The beauty of English is that sometimes one word has several meanings. Let us take a look at some meanings of the word PROOF:

2. The publisher gave me the proof of my new book for correction of printing errors.
( proof = first single print )

3. This car is proof against bullets of any type.
( proof = which cannot be damaged or affected )
It is more usual to say bulletproof.

Some more examples of this last use of PROOF are:
1.waterproof
2. foolproof
3. fireproof
In Pakistan we also use shameproof.

From now onwards we shall be studying words with more than one meanings, like we did today. 7 Aug 18

The simple word HEAD is also used for several meanings. For instance :

2. All the heads of departments attended the meeting.
( head = chief )

I invite my friends Zafar Niazi and Hidayatullah Khan to tell you more about HEAD. 8 Aug 18

Let us take a look at some interesting uses of the word FOOT .

3. Being a nuclear power , Pakistan stands on a sound footing defense-wise.
( footing = foundation )

Some interesting uses of the word HAND :

2. I took the cards and looked at my hand.
( hand = cards held by each player in a game of cards )

Today let us take a look at some uses of the word EYE.

2. I asked my friend to help me choose a good car, because he has an eye for cars,
( eye = ability to judge quality )

3. The thread was too thick to pass through the needle’s eye.
( eye = the hole at the upper end of a needle )

Some uses of the word EAR :

How does having a Mianwalian Prime Minister make you feel ?
Our sweet iconoclast, Zafar, is requested to be a bit generous in his comment as I wish to avoid a controversy on my page.
Our routine class tomorrow, IN SHA ALLAH. 17 Aug 18

A PHRASE is a group of words in a sentence, which gives a specific meaning.
Here is a little assignment for you in this regard .

Pick out the Phrases in the following paragraph :

I looked out of the window. A police van came from the right side and stopped in front of the house across the road. The driver got out of the truck and went into the house. 18 Aug 18

The basic purpose of my English posts, as I have already said more than once, is to give you some good English to read. I hope those of you, who who read my posts regularly, have found them helpful in learning the language.

For some days last year I just narrated some events of my life like I do in my Urdu posts. Looking back at those posts I see that they got very good response, the number of ‘likes’ ranging from 50 to 100.
Just keep reading whatever I write , and you will be learning English without working hard, I assure you. 20 Aug 18

Let’s look back at the history of our class.

It was mid-July 2015 when I started using the facebook. Not that I had any special desire to be a facebooker. I rather abhorred it as an idle pastime of youngsters.

It was my son, Prof Muhammad Akram Ali Malik, who urged me to come on the facebook. It took him quite some time pleading with me. At last I decided to see what I could do with a keyboard and screen, just to please my son.

I didn’t know how to download and upload pictures, or use the messenger etc .All I did know was using the keyboard for typing.
I had taught myself the use of keyboard for typing at the typewriter in our college , on which I occasionally used to type letters.

And so I decided to start my career on facebook as a writer.

But what should I write ? I asked myself, looking at the straight facebook question ” What’s on your mind ?” at the top of my page.

The teacher in me whispered, ” Why not write about what you’ve been doing all your life —– teaching / learning English ?”

A decent suggestion, indeed. I knew the readers’ response would not be encouraging, since my Pakistani brothers and sisters are allergic to learning English. But I knew they would gradually come to like my style of writing. And so I typed my first post, and posted it. In that post I said the easiest way to learn English is to read anything written in good English.

My first post attracted just half a dozen readers. Zafar Niazi was the first, followed by Prof Abdul Ghaffar Bhatti, Masroor Javaid and three others ( Sorry, I forget their names ) . They all welcomed the idea , and urged me to carry on.

And since then there was no looking back. I have been writing an English post almost daily for three years till now, and will IN SHA ALLAH keep it up.

Apart from the obvious purpose of teaching English, I write English to please myself, just as a bird sings, not for an audience, but to please itself. 27 Aug 18

Gradually the number of readers of my English posts went up to 20, judging by the number of ‘likes’. For a few moths it remained constant. Then slowly it inched up to 30. At present it averages between 30-50.

Interestingly, whenever I say ‘ A day off ‘ , the number of ‘likes’ goes up to 100 or so.😄 That indicates purely Pakistani attitude towards learning English. I just smile and move on. 28 Aug 18

In those early days we had a lively debate over my concept of good English. The debate was between Zafar Niazi and me. Zafar sparked off that debate. For a few days we kept voicing our differences with pretty hot arguments on either side, till we realized that neither of us was wrong. It was only a difference of approach.

Then one day I came up with another challenge. I said grammar cannot teach English. Most of my readers cried out in protest. But Zafar agreed with me.

For my explanation of this queer assertion, please see my next post tomorrow, IN SHA ALLAH. 29 Aug 18

Let’s celebrate the third Friendversary of facebook friendship between me and Zafar Niazi.

Not that we were strangers before this friendship. Zafar was my student in MA English about 20 years back. I remember him as a quiet, shy , thoughtful youngman in my class. Never caught him sleeping or looking around in the class. ( Perhaps afraid of the girl students 😄 ). Unlike other students he never tried to be close to his teachers. Always kept at a respectful distance from us ( or from me, at least ). All I knew about him was that he was different from others in the class.

Zafar is a multi-dimensional figure, the facebook revealed to me. He can’t be summed up in a single post. More about him tomorrow , IN SHA ALLAH. 30 Aug 18