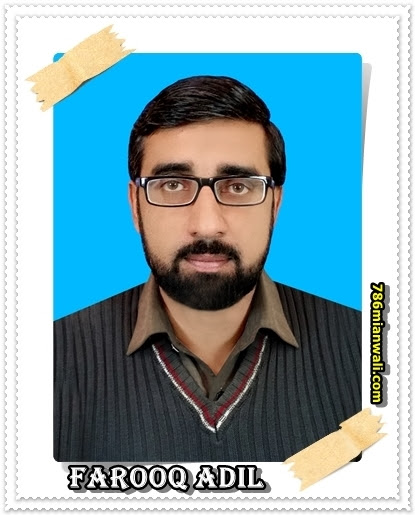 Farooq Adil is from Mohalla Mirzo Khel, Isa Khel. He got his primary, secondary and higher secondary education from his native town, Isa Khel.He is greatly indebted to all his teachers especially Ahsan Khan Niazi (late) and Kabir khan Niazi(late), who infused in him love for English Literature. Then he moved to Rawalpindi for his graduation. He graduated from Govt. Asghar Mall College Rawalpindi. After graduation, he intended to do post-graduation in English Literature. He completed his post- graduation from Punjab University Lahore.To him,  it was the kind patronage and guidance of Professor Ghulam Sarwer Khan Niazi (Chairmain, English Department G.C.Mianwali) , Professor Munawar Ali Malik and Professor Abdul Ghaffar Khan Khattak that enabled him to do his Post-graduation In English Literature.

Initially, he rendered his services as Honorary Lecturer in English at Govt. Degree College Isa khel from 2002 to 2006. Then he joined National Commission for Human Development (NCHD) and worked as Markaz Coordinator for a period  of about 4 years. Later on, he worked with a French INGO, Agency for Technical Cooperation and Development  as Team Leader  for the rehabilitation of flood-affected areas in Mianwali District.

Recently, he is running his English medium school, Siddique Memorial Model School Isa khel. He is also engaged in literary and journalistic activities. He is writing columns for the Daily Pakistan, the Daily Samaa and the Daily Taseer. He is of the view that it is only quality education that can bring socio-economic change in our country.

He contributed his Data with the website with open heart for the People for which https://mianwali.org/ team is thank full to him .His work added as  ” NAWA E SHAB “

NO OF BELOVED VISITORS